In the late fall of 1983, I was standing backstage of the Indiana University Auditorium very anxious….palms sweating….and an undesired giggle attack hiding in the back of my throat begging to get out. I was there waiting to meet a man who had always been one of my icons. Heck, not just mine but my whole generation’s.

I had just spent over an hour laughing so hard my sides ached and now here I was standing there watching him shaking hands with those who had gathered around him. I couldn’t move…started to panic that I would be like those fans who turn into babbling idiots ….afraid to open my mouth or worse giggle or cry…I stood there frozen as I could feel the heat flood my face probably making it as red as a tomato.

My friend who had been kind enough to get me there was now talking to the man, the others, who had been circled around him, had left the stage area. The man who I was so nervous about meeting…..the man whose mere presence was making my knees knock… looked at me, pointed his finger and in a very loud voice yelled “ I have never seen this woman in my life ! I don’t care what she said…it’s not mine ! “ I burst out into laughter holding on to my then jiggling stomach ….as at the time I was 8 months pregnant and feeling (and in at least my mind looking) very much like a beached whale . He came over to me smiling and took my hand…I looked into his gentle face and warm eyes… I knew that he was someone I would love and admire forever. His name was George Carlin.

I only got a few moments of his time as he had to leave but it was such a special memory to me. May 12th is his birthday and I decided to take the rest of the month to share some of his words with you…An amazing man who left us with an amazing legacy : 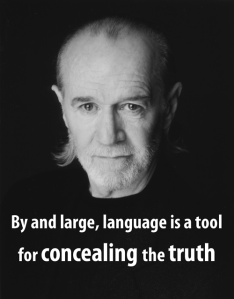 Please check out my “Quotes of Note” page for more of the thought-provoking smiles he left us.